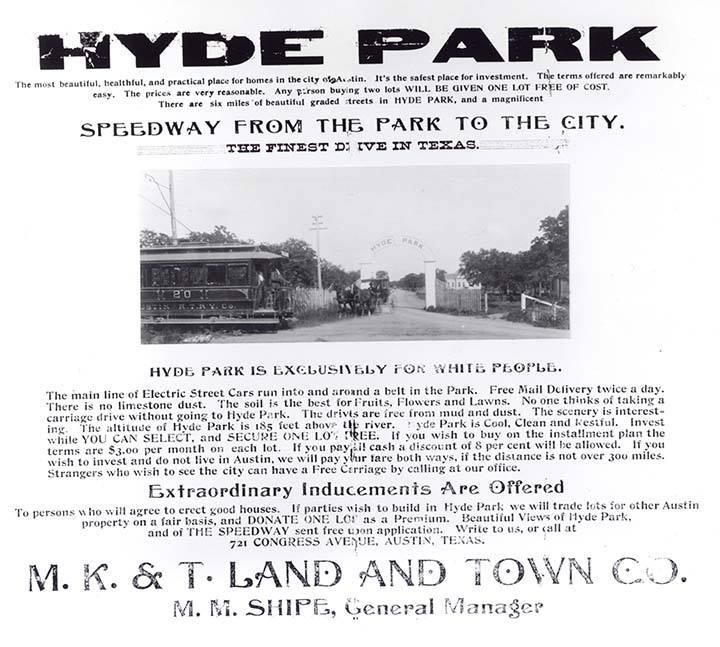 In CodeNEXT, Neighborhood Conservation Combining Districts (NCCDs) creating de-facto zoning barriers to class and race is not a zoning code. It’s a betrayal of Austin values. Friends of Hyde Park, the largest neighborhood association in Hyde Park, has unanswered questions and grave concerns on why the latest maps for CodeNEXT show the new land development code not applying to the area, resulting in Hyde Park no longer being considered a “core contributing” neighborhood to the recently passed Strategic Austin Housing Blueprint.

If the latest preliminary maps for CodeNEXT are approved by Austin City Council, the zoning for Hyde Park will be composed of the same NCCDs in the current code which have proven to inhibit affordability, class and racial diversity. NCCDs applied to Hyde Park (and other core neighborhoods in Central Austin) are a main reason much of current housing stock has become out-of-reach for nearly all Austinites, save upper middle-class and wealthy homeowners. For more information about how NCCDs impact Hyde Park and to view the previous Friends of Hyde Park voting results on a new land development code, click here.

Friends of Hyde Park is asking the City Council to implement what it approved through the Audit of Neighborhood Planning, “via a resolution, the City Council directed the CodeNEXT process to address this issue as part of the revision process. The Household Affordability Code Prescription agreed with and referenced the findings of the Impediments to Fair Housing Choice report. To address the impediments created by the opt-in/opt-out zoning practices allowed by the Neighborhood Plan Combining District sections of the Code, the prescription recommended that code provisions regarding the choosing of which infill options would be allowed in a planning areas be eliminated through the CodeNEXT process.”

Due to Austin’s housing crisis, CodeNEXT was born out of the desire of Austin City Council to correct these current and past systemic barriers to affordability on behalf of all Austinites. The Friends of Hyde Park has been a vocal supportive partner for the development of CodeNEXT and is supportive of the Strategic Austin Housing Plan to enable every Austinite to achieve housing security.

The Friends of Hyde Park board considers this result to benefit wealthy homeowners at the expense of our endangered middle and working-class as an affront to Austin values. We will not endorse a CodeNEXT land development code which codifies the 20th Century Jim Crow white-only deed restrictions in which Austin’s first suburb was founded. In the 21st Century, the future of Hyde Park zoning is a forward-thinking map which embraces missing-middle housing and needed density to grow a sustainable and diverse middle and working-class in Austin.